WTF!!
I'm so freaking outdated..
Just realize that our PM is seriously planning to built a
100-storey mega tower!!
What he's trying to prove? 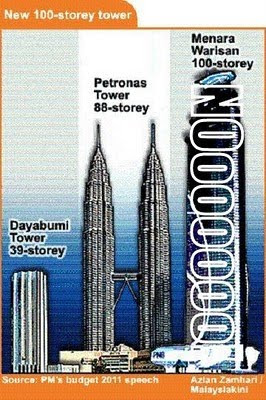 Malaysia being the best, taller than the rest!!
Source: The Prime Minister of Malaysia on 15 October 2010 during his tabling of the Budget 2011 in the Parliament has announced to build the Warisan Merdeka, which will be undertaken by Permodalan Nasional Berhad. This is an integrated development comprising a 100 storey tower, which will be the tallest building in Malaysia, replacing the 88 storey Kuala Lumpur City Centre. The total projected cost of the project is RM5billion and the 100 storey tower is expected to be completed by 2015. Development of the entire project is scheduled to go on until 2020.
I remembered..
They said that our country could go bankrupt
The hike of fuel price is to aid and stabilized the economy
now suddenly..
They have enough budget to stick a huge and tall "Batang"
I love
1Malaysia
Ok study study...
...Last paper tomorrow
Posted by Simon Loh at 5:20 PM

may be is a hidden fight.every new people must have their own representative incident or thing. such as previous we got one twins tower which design by....and now....coming soon....kekeke

haha.. true. just typical powerful ppl.. Desperate to leave a legacy behind so they could be remembered when they sign out~~~ looks like building in KL will only get taller after each election...